Among the goals is providing backward compatibility with mainframes and other relational data stores that are currently unable to handle data analytics and machine learning workloads. Rather than replacing those assets, Aerospike’s connector makes its Database 5 platform plug-compatible with enterprise data fabrics.

The bi-directional database connector could help reduce data scans from half a day to about 2.5 hours, Srinivasan added in an interview, enabling real-time database access and reduced latency.

The connector “augments traditional systems to create real-time data-driven systems that extend and enhance rather than rip and replace existing functionality” that are vital for capturing data and business processes, the company said.

Also supported is a connection of the Aerospike database to enterprise streaming pipelines based in Kafka. “The integration enables Aerospike Database 5 to pull data from Kafka and to submit Aerospike change notifications via the optimized Database 5 protocol to Kafka,” the company said.

Support for the Java Messaging Service allowing enterprises to use JMS stream data into and out of the Aerospike database. JMS is a preferred means of synchronizing with mainframe applications.

Apache Pulsar is also supported via an outbound connector that delivers change notifications from the Aerospike platform via a database protocol to the Pulsar distributed messaging and streaming platform. That feature targets streaming pipelines for applications ranging from the Internet of Things to log analysis. 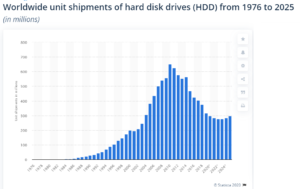 10 Big Data Statistics That Will Blow Your Mind