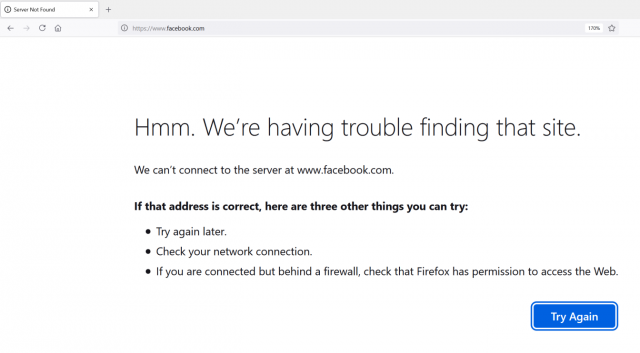 At 11:39 AM EST this morning, someone at Facebook updated the company’s BGP (Border Gateway Protocol) records and knocked Facebook, Instagram, Oculus, and WhatsApp offline in the process. As of this writing, all three services remain offline.

BGP is the protocol large organizations like ISPs use for sharing information on traffic routing. If a user in Germany wants to access information on an Australian server, that data request is going to move through multiple large networks. BGP is fundamental to that process and to the function of the internet itself. When Facebook updated records with bad information it effectively deplatformed itself and its associated properties.

Facebook employees can’t enter the headquarters because their badges don’t work, and those already inside can’t enter various rooms because access is linked through the IoT (Internet of Things) and so goes through the same DNS routes that no longer exist:

Kentik via Krebs on Security

There’s nothing wrong with any of Facebook’s servers or backend, as far as we know. Without valid BGP routes, however, no other ISP or service knows how to route traffic to Facebook or its other services. FB staff are reportedly locked out of both their workplace and their Workplace — in addition to the problems with physical access mentioned above, the company’s internal work platform reportedly isn’t functional, either.

The timing of the problem will add to Facebook’s recent woes. The company has been under fire for weeks following a scathing series of reports. This weekend, whistleblower Frances Haugen went public about her work at the company and Facebook’s own efforts to push content that made people angrier and unhappier in order to boost engagement metrics.

Two other points we want to mention: Recent reports that the personal credentials of 1.5 billion FB users were being offered for sale on hacking forums both predate this event and do not appear to be related to it. Second, Facebook.com is not actually up for sale, despite the fact that it’s appeared on several domain registrars. Facebook is its own domain registrar, reports Ars Technica, and thus we will not be treated to the delightful schadenfreude of watching Facebook sue to get its own brand back after what may have been a brilliant self-own.