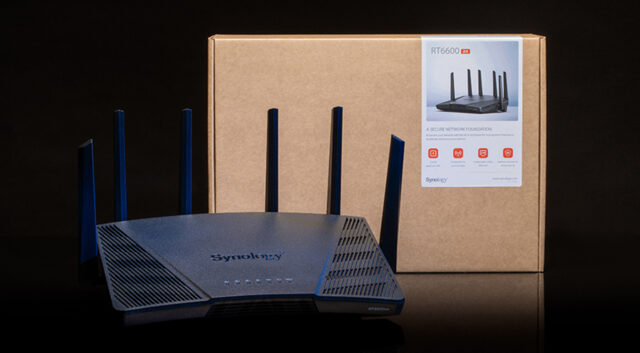 Synology is best known for its NAS (Network-Attached Storage) devices, but over the last few years, it’s expanded into selling routers and access points. I’ve been pleased with my existing Synology router. But lately, I’ve been looking for more throughput now that I have a gigabit cable speed as well as an increasing reliance on active intrusion detection. So, I upgraded my home office router, a Synology RT2200ac, to the new Synology RT6600ax Tri-band Wi-Fi 6 router shortly after it came out. It has an MSRP of $299, but it’s

Positioned next to the 6600ax (the top 4 Wi-Fi tests), I was able to get double the throughput I could get from the same device when it was next to our older 2600ac (bottom Wi-Fi test). My speed did drop off fairly rapidly with distance. For more detailed tests, the lab at our sister publication, PC Magazine, was used in their review.

A few other specs have been bumped up that may make the router more exciting for sophisticated users—including the addition of VLAN support. In the case of our home + office, we have close to 50 devices on our LAN, about 30 of which relate to IoT of some kind. It’d make a lot of sense to move those to their own VLAN given how prevalent security issues are for low-level devices.

There are some increased Safe Access and Parental Control options, but I haven’t had time to experiment with either of those. There are also plenty of other packages you can install if you want to do more tweaking of the router’s functionality, by adding a DNS or VPN server, for example. Synology’s packages are essentially curated versions of Linux apps with a simple interface for installing and updating them.

Synology’s SRM router OS provides a fully-windowed user interface that is a close cousin to its DSM NAS interface. As someone who spends an inordinate amount of time dealing with obtuse router, switch, and ATA configurations to get my work done, I appreciate Synology’s ability to provide a simple, mostly-clickable, interface to the functionality of its devices compared with the command-line tools many others require. It’s not perfect, though. In particular, finding its list of DHCP clients always seems elusive. However, SRM’s Search feature is great for finding commands and settings, and the screens are well-designed, with good feedback when you make a change, or when a change is incompatible. There are also plenty of options for how and when you want to get upgrades for both packages and the OS, and I’ve always found the upgrade process seamless.

One reason I’ve waited to publish this review is that mesh routing wasn’t fully supported until recently. With SRM 1.3.1, you can use your RT2600ac and MT2200ac devices as Wi-Fi connection points. The interface is very similar to that of the older model, and lets you add Wi-Fi access points either wired or over Wi-Fi. I got confused at first because the help file says to reset the access points before you add them, but it also says they need to be upgraded to the latest OS version. Given my assumption that a reset would reset the OS, I went around in circles a bit until Synology support helped me out by saying I could upgrade and then reset without losing the new OS.

The only issue I’ve had with the mesh solution so far is that if I position two access points and the router in a triangle, then devices can sometimes get dropped. I thought it might be because one of the APs changes from getting fed by the router to getting its backhaul from the other AP. I locked that down in settings (a nice feature), but that wasn’t the answer. Ultimately, I just moved the APs to be in more of a “line” out from the router.

One issue I’ve found with many routers is that even though they might offer an option for intrusion and threat protection, that option greatly reduced the device’s throughput. With the RT6600ax, I was pleasantly surprised to find that I could run Synology’s Active Threat Prevention and still get nearly 1Gbps from our cable provider through to connected devices. On the 2600ac router, activating its equivalent package caused a performance hit, even at lower speeds.

In my experience, Synology’s software updates and support are highlights of the company’s offerings. Every product I’ve tested has a straightforward interface that allows you to check for, download, and install updates. Newer releases let you set those up to happen automatically. That’s especially handy if you have some “appliance” NAS units for video surveillance or other low-level functions that you aren’t spending time actively managing. All the releases also have comprehensive release notes. Synology support has also been quite responsive, always with better than a 24-hour turnaround in my experience.

At its MSRP of $299, the Synology RT6600ax is a little more expensive than some models with similar specs, but you get an excellent set of pre-packaged applications, an easy interface for adding and managing new packages, and a well-tested router OS. However, right now it is hard to find one for that price, for some reason. Hopefully, that will change soon.