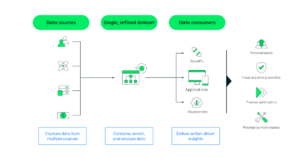 MongoDB held its annual user conference this week, which means database customers have been inundated with new features and capabilities. Some of the most compelling enhancements unveiled at MongoDB World revolve around new analytics capabilities in the upcoming version 6.0 release of the NoSQL database.

MongoDB, of course, was not designed for analytics. As a document store with a JSON-like data structure, the database was intended to make it easy for developers to build Web and mobile apps, which typically fall into the operational and transactional buckets.

But data analytics is increasingly a priority for companies, and so MongoDB is looking to build more analytic capabilities into its database. Delivering some analytics within the database makes sense, as it eliminates the need for companies to ETL the data into a dedicated OLAP environment, which brings latency, complexity, and cost to the equation.

To that end, MongoDB unveiled three major new features at MongoDB World this week. The first is a column store index, which will let customers run common analytical queries without moving the data or changing its structure, the company says. Most SQL-based analytic databases store data in columns (as opposed to rows), which results in faster processing for data aggregation.

MongoDB also announced a preview of Atlas Data Lake, which will provide an isolated “companion” data lake on which to perform analytics. The company says it will provide “the economics” of cloud object storage in a database environment that sits adjacent to the company’s primary MongoDB store.

Atlas also gets a new SQL Interface that will give analysts a familiar way to interact with read-only data using SQL or BI tools that speak SQL. MongoDB is also giving Atlas users the capability to query data across Atlas cluster and cloud object stores using SQL, without needing to flatten the data or manipulate it in any way.

The New York-based company is advocating the benefits of real-time analytics in its database. MongoDB says developers can leverage real-time analytics to power things like personalization, fraud prevention, performance optimization, and preemptive maintenance.

MongoDB is also positioning its database as a good repository in which to store sensor data, event data, and streaming data from IoT devices and applications. The company offers a connector for the Apache Kafka pub/sub framework to streamline these types of deployments.

The company is also adding several non-analytic capabilities to the database with 6.0 and updates to Atlas. An update to Atlas Search will make it easier to build “relevance-based” search capabilities into their applications, MongoDB says.

It also unveiled new data federation capabilities that will allow teams to create virtual databases. The company says development teams will be able to “query, transform, or create views across one or more collections, MongoDB clusters, and storage buckets.”

MongoDB also announced the GA of Atlas Serverless, giving users the ability to use the database without worrying about underlying resources. It also announced a new cluster-to-cluster synchronization capability that works across Atlas, on-prem clusters, or a mixture of both.

It unveiled Atlas Device Sync, which connects a database to Realm, a mobile database, as well as Flexible Sync, which gives admins more granular control over the data synced to user applications as well as permissions.

Lastly, MongoDB unveiled the Data API, which it bills as “secure API for accessing Atlas data over HTTPS without any operational overhead.” The Data API, MongoDB says, will provides developers an easy way to extend Atlas data to other apps or services in the cloud.

The IoT data deluge in industry and manufacturing