The Internet of Shittiest Things: ExtremeTech’s All-Time Hall of Shame 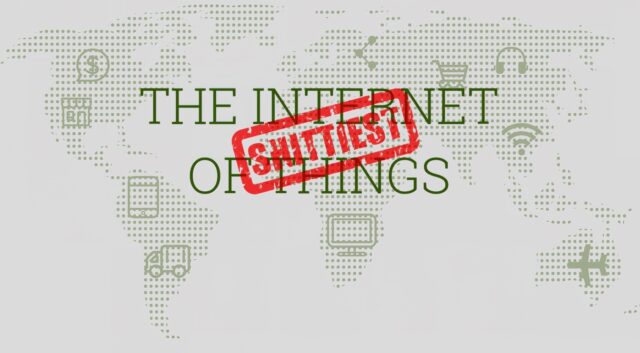 The Internet of Shitty Things is here. Have all of your best home appliances ruined by putting the internet in them!

She’s cocking her head like a golden retriever because she’s overwhelmed with joy.

None of this is going to make it less annoying when you can’t tell if you’re in front of the frozen pizzas or the ice cream, but I want that annoyance to come with some perspective. This didn’t happen by accident. A lot of engineers worked very hard for decades to invent the technology that allowed someone with twin degrees in Marketing and Evil to bring this beautiful advertising dream to fruition.

#3. Mobile Interfaces Made From Human-Like Skin

It is a truth universally acknowledged that an engineer in possession of an idea for a device interface based on the manipulation of realistic human skin must be in want of a life. However well-explained the justifications of such a man may be upon his first unveiling of the cursed skinterface, this truth is well fixed in the eyes of all who view it.* The character in the demo looks mad because she’s being pinched.

This is one of those projects that I would desperately like to believe is a joke, despite all evidence to the contrary. Several years ago, creator Marc Teyssier and a team of other collaborators unveiled Skin On to the world, writing: “Human skin is the best interface for interaction. I propose this new paradigm in which interactive devices have their own artificial skin, thus enabling new forms of input gestures for end-users.” “Beige isn’t really my thing. Does it come in ‘vascularized’?” said no one, ever.

It’s easy to understand why humans would look to biology for inspiration. Biological power efficiency is far better than any silicon system. Supercomputers can’t simulate a human brain in 20 megawatts, but the soggy sack of fat and cortices stuck inside of our skulls gets the job done in just 20W. So far, so good, but when it comes to skinterfaces, I feel like a little Goldblumian humility might be in order. Designing a physical covering that allows robots to feel sensation is pretty interesting, but could we get it in a form factor that feels more like our theoretical high-concept sci-fi future and less like something Buffalo Bill from Silence of the Lambs would’ve used in lieu of a mouse? I first wrote about this project back in October 2019, and while I’m not blaming its existence for the events we’ve all enjoyed these past three years, I would like to point out that I ended my original story by asking people not to contact its creator because “There are reports that placing five of these products in a pentagram may cause the formation of a Hellmouth.”

* – With apologies to Jane Austen

When I wrote about this topic back in April 2020, there was just one group of Stanford researchers working on this idea. A few more shart-ups have debuted since then, including Coprata and a company named Toi Labs. Toi Labs manufacturers a smart toilet they call the TrueLoo, which they advertise with what may actually be the world’s worst shtat counter:

I have found the worst thing. It really does go up in real time.

The researchers who develop these excreting new technologies often emphasize their utility when it comes to tracking medical conditions and overall health. While I have always acknowledged this very real benefit, events of the last two years have given me a newfound appreciation for the idea. In early 2021, I developed the symptoms of inflammatory bowel disease. This went on for five weeks and it radically transformed both my diet and my life.

My issues were eventually resolved with medication and nothing similar has happened to me since, but it was an eye-popping example of how a digestive condition can upend daily existence. I couldn’t eat until 2 – 2:30 PM for over a month because once I ate, my workday might be over. My official medical diagnosis after multiple tests and doctor visits was: “Well, you feel better now, right?” It wasn’t a particularly satisfying outcome. I can understand why doctors want an additional way to analyze and track what’s happening with a patient “at the source”, as it were.

But — IBD symptoms or not — I’m still weirded out at the idea that the toilet might record my personal logs. The benighted Stanford research team we covered back in 2020 decided that their smart toilet needed what I described as “a stoolproof method for detecting even the stealthiest deuce dropper.” They found it.

I must now regretfully inform you that your butthole contains a unique set of stains, creases, toilet paper flecks physical characteristics that allow researchers to identify you, like the world’s most horrifying fingprint. The original research team imagined patient data being uploaded to a private cloud server for every individual who used the toilet. Toi Labs appears to have a similar idea.

How do you bring a tracking system like this to market and not call them “Flatus Reports?”

While the idea of a cloud-connected analyzer with personal butthole scanning is objectively horrifying, the smart toilet is Number Two on our list for a reason: It’s the only product on this list that has even the slightest chance of improving the life of a human being.

Different people answer a question like “What can I do that can have the greatest impact on humanity, on human health?” differently. Edward Jenner invented vaccination. John Snow pioneered the use of anaesthesia and helped found epidemiology. Jonas Salk had a bit of success against polio. Doug Evans — well, when Doug Evans asked himself that question, his answer was to build a $700 machine to squash pre-pulped vegetables into slurry. Then he slapped a DRM system on it that would’ve made Keurig blush.

Juicero — that was the name of both the company and its chief product — billed itself as a life-changing way to deliver nutrition via the power of beet squeezings. If you think I’m exaggerating, check out this amazing ad the company cut. Anyone who can explain why the woman makes a “baah” noise like a sheep at ~1:43 gets a cookie.

One of Juicero’s mistakes was building a core market around people who think drinking juice starts with going to a farmer’s market to buy fresh produce as opposed to digging the Tropicana out of the back of the fridge. However annoying it is to make juice — and this interview between Evans and Kara Swisher does make the process sound genuinely bothersome — there was always a limited market for a $700, purpose-built home appliance with an onerous DRM system. Voiceover: “Literally there is juice in my veins.” – Founder and remarkably unhealthy-looking person, Doug Evans

You can tell a person has a healthy sense of their own potential achievements when they start out by comparing themselves to Steve Jobs.

Juicero’s DRM system was a nontrivial part of its problem, and what separated it from every other expensive juicer aimed at the kale-and-cauliflower-smoothie set. The Juicero wouldn’t squeeze just any packet of carrots, you see. Every single-serving sack had a QR code with an expiration date. Packs typically didn’t last more than 5-7 days, and the machine refused to process expired packets. Individual servings of juice cost between $5 – $8 depending on what you wanted, so the window between purchase and consumption was small. Voiceover: “What comes out of the Juicero is so fresh that it shouldn’t even be called juice. It should just be called, I don’t know, squashed produce? Because that’s what it is.”

Juicero raised $120M and launched at $700 before cutting the price to $400 when demand failed to materialize. It’s not clear if the $400 price cut helped much or not, but the kiss of death for the company came when Bloomberg released a video of someone compressing a Juicero package by hand. As the video shows, human hands could crush produce just as well as the machine could, no DRM check required.

After Bloomberg’s video, the company attempted to defend itself by doubling down on the idea that meat-squeezed plant matter was infinitely inferior to Juicero. Doug Evans had stepped down by this time, but then-CEO Jeff Dunn stepped bravely to the plate.

“The sum of the system — the Press, Produce Packs and App — working together is what enables a great experience. However, you won’t experience that value by hand-squeezing Produce Packs, which to be clear, contain nothing but fresh, raw, organic chopped produce, not juice. What you will get with hand-squeezed hacks is a mediocre (and maybe very messy) experience that you won’t want to repeat once, let alone every day.”

This line of thinking convinced absolutely no one.

A follow-up story put a final bit of polish on the tale. Juicero always argued that its $700 machine was sold at a very reasonable price relative to what it cost to make. According to an teardown analysis of the product, that was probably true. The machine used customized machined parts and was engineered for maximum beauty — at maximum price. The pressure plate used to crush the various fruits and vegetables was incredibly expensive. As Ben Einstein wrote: “If the primary mechanism could apply force in a more focused way it could easily save hundreds of dollars off the shelf price of the products.” (Emphasis Original)

Juicero spent so much money designing a juicer, it designed itself right out of a market and became a cautionary tale. It wins top billing in the ExtremeTech IoT Hall of Shame because it’s a near-perfect incapsulation of everything we love to hate about the IoT. A product no one needed with an integrated DRM solution no one wanted, launched to solve a problem that didn’t exist. As sustained forays into bad ideas go, Juicero is the act to top.

I hope you’ve enjoyed our tour of the best of the worst IoT devices. If you’re looking to read about some Dishonorable Mentions, I’d recommend bricked shoes, remarkably stupid smart locks, and an adult sex toy that threatened to turn a night of novelty into a much more permanent situation.