Some of Blockchain’s Possible Applications

Some of Blockchain’s Possible Applications

Blockchain is a nascent technology that promises wonders to the world. Some say it is the so much needed innovation for the coming age of the Internet of Everything as it has the potential to become the structural ledger of everything. Various authors such as Don Tapscott and others argue that the blockchain will shape the next era of prosperity—in finance, business, healthcare, education, governance, and beyond. It’s opportunities are so significant that it’s a question of when, not if, these applications will emerge.

In this article we cover a few of the possible applications of blockchain in:

Most of the ones living in western countries, aren’t aware how identity is a major problem in our world. Maybe we became a bit more conscious of the importance of proper identification with the heightening of the refugee crisis that led millions upon millions of refugees to flee their homes becoming undocumented. Statistics for the year of 2016 speaks of 232 million undocumented migrants. Recently various NGOS have tried to find innovative solutions to solve the identity issues happening in the digital age.

BitNation is an example of an organization pushing forth the boundaries of autonomous governance and identity services. The organization claims for a governance 2.0: What it means is that it seeks to provide people with the same services traditional governments provides, from dispute resolution and insurance to security and much more – but in a geographically unbound, decentralized, and voluntary way. Bitnation uses the Bitcoin 2.0 blockchain technology. Besides offering its users the possibility of forging a world citizenship ID, tey have recently created a project called Refugee Emergency Response (BRER), to help solve refugee identity crisis in Europe via the blockchain. Bitnation believes that BRER can help fleeing Syrians get identification easily as a basic global right.

Another company working with identity is Onename. According to the company’s founder, Onename can help solve the identity issue as well through its blockchain-based identification protocol. Onename usernames are created within an open namespace and user data is embedded directly into the blockchain.

Another application of blockchain health is in global public health. For example, blockchain could be used for the efficient, immediate, targeted delivery of aid funds for supplies in the case of crises like Ebola and other contagious disease breakouts.

Emergent economies such as African ones, have adopted enthusiastically mobile payments. There are already a number of SMS Bitcoin wallets and delivery mechanisms, such as 37Coins134 and Coinapult, and projects such as Kipochi135 that are integrated with commonly used mobile finance platforms like M-Pesa (in Kenya, for example, 31 percent of the GDP is spent through mobile phones136).

Swan gives the example of apps could be built on infectious disease tracking sites like Healthmap and FluTrackers to include Bitcoin donation functionality or remunerative appcoin more generally.

Another example is The Genomic Data Commons. The GDC was established by the University of Chicago in partnership with the NCI, to assemble a gigantic database to focus on genomic research and personalized medicine. In this case, the resource is said to be available to any US-based researcher. This is a good step forward in organising data into standard unified repositories and allowing access to a certain population. A further step could be using an appcoin like Genome‐ coin to expand access on a grander scale as a public good fully accessible by any individual worldwide. Further, the appcoin could be the tracking, coordination, crediting, and renumerative mechanism sponsoring collaboration in the Genome Data Commons community.

Healthcoin could more broadly be the coin or token for health spending, forcing price discovery and rationalization across health services. Services in national health plans could be denominated and paid in Healthcoin. Another possibility could be record storage.

DNA.bits is an Israeli organization that applies Fin-Tech innovation (Bitcoin and Block-Chain platform) to solve the need for large sets of clinical data and correlated genetic samples. Our solutions utilize the power of block chain cryptography to enable tagging, tracking and cross-referencing health related data in secure, authenticated and anonymous way. 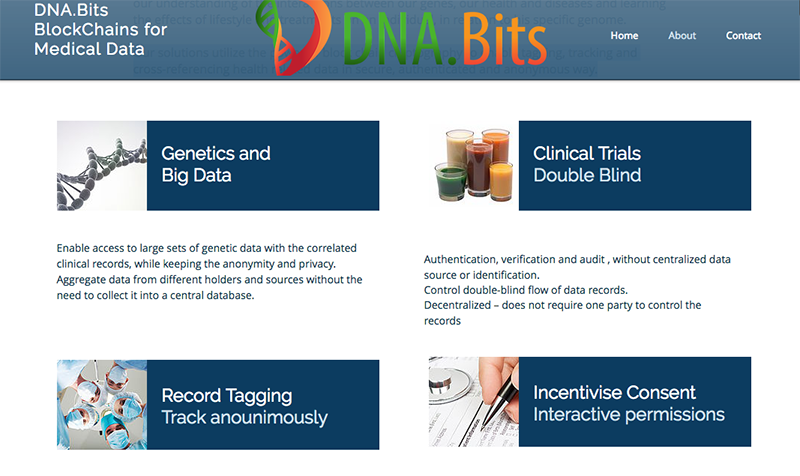 Blockchain could challenge profoundly censorship, as it enables the development of Distributed Censorship-Resistant Organizational Models. Addressing censorship, Melanie Swan describes 3 categories of applications of blockchain: blochain 1.0, 2.0 and 3.0. Thus Blockchain 3.0 leads us to “the next category of application beyond currency and market transactions.

“Through its global decentralized nature, blockchain technology has the potential ability to circumvent the current limitations of geographic jurisdic‐tions. There is an argument that blockchain technology can more equitably address issues related to freedom, jurisdiction, censorship, and regulation, perhaps in ways that nation-state models and international diplomacy efforts regarding human rights cannot.”

This is provided by the blockchain’s immutable public record, transparency, access, and reach. Anyone worldwide could look up and confirm the activities of transnational organizations on the blockchain. Thus, the blockchain is a global sys‐ tem of checks and balances that creates trust among all parties. This is precisely the sort of core infrastructural element that could allow humanity to scale to orders-ofmagnitude larger progress with truly global organizations and coordination mechanisms.

One example is Namecoin. One of the first noncurrency uses of blockchain technology was to prevent Internet censorship with Namecoin, an altcoin that can be used to verify Domain Name Sys‐ tem (DNS) registrations.

Namecoin is an alternative DNS that is transnational and cannot be controlled by any government or corporation. The benefit of a decentral‐ ized DNS is that it makes it possible for anyone worldwide who might be otherwise suppressed or censored to publish information freely in the Internet. Namecoin can be used to:

The post Some of Blockchain’s Possible Applications appeared first on Intelligent Head Quarters.

The post Some of Blockchain’s Possible Applications appeared on IPv6.net.